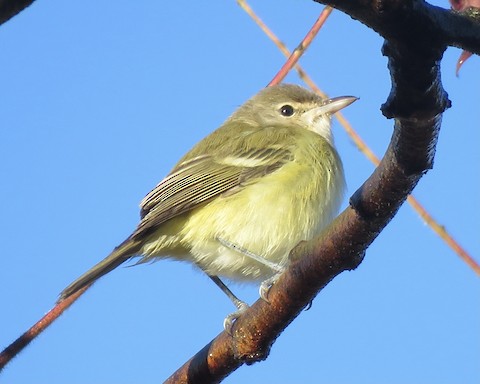 Vermont’s first-ever Bell’s Vireo delighted 30 birders over the course of 9 days in mid-October; many were able to claim it as a “life” bird. 18 October 2021, Woodstock, VT. © Jim Mead

The text from Kyle Jones at 11:52 am on October 15—accompanied by two photos of a small yellowish vireo—read simply: “Thoughts? I thought Philly in the field, but ruling out Warbling might be useful. No October Warbling records for Windsor County.” Rimmer’s read, based on a cursory inspection: “Philly all the way, though less yellowish on chest than many.” A few hours later, VCE’s Nathaniel Sharp (who was in Indiana…) sent an email to Kyle: “Hey Kyle! Your vireo is really throwing me for a loop…https://ebird.org/vt/checklist/S96181043. Are those wing bars I see? This is giving me weird Warbling/Philadelphia vibes, and it doesn’t really look right for either. Any chance you have any other photos of this guy lying around?” Kyle produced several additional images, prompting this from Nathaniel: “WOW! With those photos I’m even more convinced. Bold white wing bars, yellow flanks, faint white lores/supercilium, dark eye, white throat, gray head, greenish back. That all looks dead-on for Bell’s, and I think any other expected (or unexpected) vireo can be safely ruled out.” Kyle Jones’ original two photos of a Bell’s Vireo he discovered on the Ottauqueechee River Trail in Woodstock on 15 October 2021, and sent to C. Rimmer for an ID opinion. Wing bars, what wing bars?? © Kyle Jones

Chagrin on the part of two veteran birders (and some well-deserved ribbing from others…) aside, thus began the 9-day saga of Vermont’s first-ever documented Bell’s Vireo. This diminutive songbird—the smallest member of its family in North America—breeds primarily in the U.S. Midwest and Southwest, but is well known for its vagrancy, especially in autumn. As reported in the 2020 Birds of the World account, “An unusually large number of extralimital Bell’s Vireo reported from throughout both eastern and western U.S. and even southern Canada. It is difficult to determine if increasing reports of vagrant Bell’s Vireo are due to actual range extensions and increasing movements, better observer coverage, or both.” 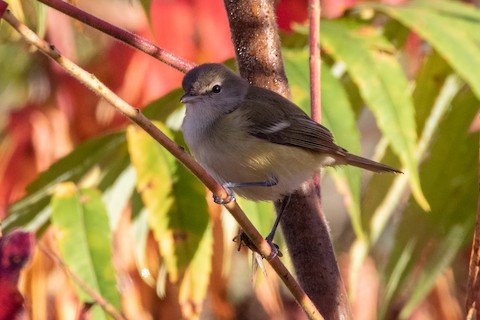 A vagrant Bell’s Vireo, observed by many birders between 15-23 October 2021 in Woodstock, VT. ©  Kent McFarland.

This first state record was not a splashy find, nor did it draw nearly as many birders from around the state as other more conspicuous recent rarities—such as the wayward Brown Booby (Vermont’s second ever) that spent 7 days on Bennington County’s Lake Paran and Emerald Lake between 31 August and 6 September. While eBird records show that at least 100 birders observed the booby (it was, admittedly, hard to miss), the nondescript vireo attracted exactly 30 enthusiasts over two fewer days. Many, including yours truly, were thrilled to chalk it up as a “lifer“. Obligingly, this misplaced songbird confined its whereabouts to a narrow hedgerow along the Ottauquechee River Trail in Woodstock, proving reliably findable, though some had to work hard for definitive views. Its spry behavior was far more reminiscent of a kinglet than a typical vireo, as it foraged actively, often low to the ground, flicking its wings and tail, in near constant motion. The bird definitely had attitude and charisma.

Will the vireo’s pluck be enough to reorient and carry it back to where it belongs, which is basically the Pacific slope of Central America at this time of year? Probably not. Most vagrants, which by definition are far off their intended course, never manage to correct their navigational errors and return “home”, wherever that may be. We humans must balance the thrill and joy of a rare discovery like this Bell’s Vireo with the reality of its situation, which is almost certainly terminal homelessness. We’re the fortunate ones, our lives made richer by a displaced avian treasure. Vermont’s first documented Bell’s Vireo perches  cooperatively on a staghorn sumac branch on the Ottauquechee River Trail in Woodstock. The bird made many observers work hard for unobstructed views like this one, but it was reliably found over the 9 days that it occupied a brushy hedgerow. © Philip Stollsteimer

And, for all us supposedly accomplished birders—OK, especially me and Kyle—there is a take home message in this tiny bird’s unexpected appearance. In Kyle’s words: “My lesson (Little Egret [also a first state record found this past June, initially misidentified as a Snowy by both Kyle and yours truly], and now this) is that rare birds need VERY careful consideration—throw out the assumptions!” In my words: “Thanks, Nathaniel!”