The best photo that anyone was able to capture of a White-eyed Vireo present at Ratcliffe Park in downtown White River Junction over 3 days in late November 2021. The bird chose not to cooperate freely with birders, as it moved constantly through dense thickets and afforded fleeting glimpses at best. 25 November 2021. © Ben Wardrop

It’s not often that vireos steal the birding spotlight, but Windsor County birders have been kept on their toes in recent weeks, with three unexpected occurrences by members of this family. First, Vermont’s first-ever Bell’s Vireo made its debut over 9 days in Woodstock. That in itself was exceptional, and thrilling for the 30 of us who were lucky enough to see the bird. Then, a month later, on two consecutive late November days, eyebrows were further raised by the near-simultaneous—and literally side-by-side—appearance of two equally unanticipated vireos in a small White River Junction park.

On 23 November, a cold and blustery day that felt every bit a harbinger of winter, Kyle Jones was birding behind the Amtrak station in downtown WRJ (waiting for his car to be serviced) when a band of 3 chickadees, with an unfamiliar bird in tow, caught his attention. Binoculars quickly revealed a… White-eyed Vireo, a species that breeds no closer to the Upper Valley than southern New England and should by all rights have been in the southeastern U.S. or Mexico by that date! Kyle—now minted the Windsor Co. Vireo Whisperer—texted yours truly, and I arrived as quickly as I could, proceeding to spend a very chilly hour searching in vain. As I was leaving, Wayne Scott showed up. I wished him luck, and was hardly surprised to learn that he found the bird 45 minutes later in nearby Ratcliffe Park, ∼250 meters south. I had to smile, if a bit ruefully.

The following morning found me and several other birders back at Ratcliffe Park, in sunnier, calmer and decidedly warmer conditions. The White-eyed Vireo was either absent or unwilling to cooperate, but 3 of us had an intriguing and fleeting glimpse of a different bird that looked to be another vireo! This one had no wingbars, eye ring or other prominent markings. We were stymied, and my two fellow birders departed. Sticking it out just a bit longer, I was soon rewarded by a close-up view of the White-eyed—phew, shutout avoided. And, I had yet another tantalizing glimpse of the mystery bird, reinforcing my thought that it was an entirely different species of vireo. Unable to relocate it, I left, thoroughly puzzled.

Day 3 of vireo mania may have been a national holiday, but several birders with questionable priorities (at least in their families’ eyes) again converged on Ratcliffe Park. The White-eyed obliged most, but not all, of us by providing a few momentary glimpses, continuing its habit of near-constant movement through the dense thickets. Thinking that I had the bird in my sights as it roosted with head tucked into back feathers in a shrubby dogwood—looking decidedly cold-stressed—I quickly realized that it lacked wing bars, had a plain gray face, and was a much more drab gray above than the more greenish-gray WEVI. When Cedar Stanistreet and Jim Mead got their eyes on it moments later, and it then flew into very close range while foraging (within a meter at one point), there was no question that we were watching an exceptionally late Warbling Vireo! We were stunned, as the species normally departs Vermont in September, and should have been well >1,000 miles to our south on its Central American wintering grounds. Thankfully, Ben Wardrop captured some excellent photos for confirmation. A cold-stressed and exceptionally tardy Warbling Vireo at Ratcliffe Park in downtown White River Junction was the latest individual of this species on record for Vermont, and the only individual of its species ever documented during November in northern New England. 25 November 2021.© Ben Wardrop

There are 4 November records of Warbling Vireo from Massachusetts, three of them coastal, and the latest a Cape Cod bird on 17 November 2018. eBird shows only two December records from eastern North America, one from Cleveland on 12/1/09, another from Baltimore on 12/15/09. Note that fully half of the 8 tardy records above, including the WRJ individual, were documented in 2021! This is far too small a sample to warrant any inferences, but it’s intriguing. We certainly had plenty of warm weather this autumn, but I’m far from convinced that it was exceptionally balmy.

Again, a surprising number (4) of these records are from 2021, and 2017 proved a phenomenal autumn for vagrant White-eyed Vireos in Maine. These out-of-range appearances likely result more from chance and coincidence than any biologically-related synchrony, but they beg questions of what drives late fall northern movements in this southern-breeding songbird. And, the extremely tardy Warbling Vireos?? I’m not about to hazard a guess as to why those birds lingered, but I’m thankful to have been a beneficiary of 2021’s Autumn of the Vireo in Windsor County. What’s next, Kyle?? 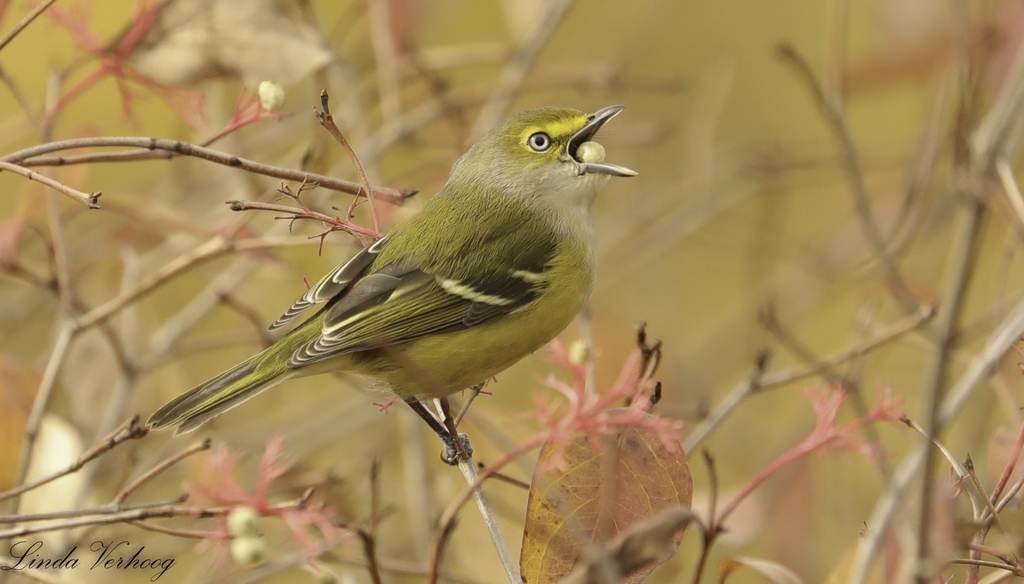 A far more conspicuous and observable White-eyed Vireo, though NOT the Ratcliffe Park bird seen by several observers on 23-25 November 2021. © Linda Verhoog licensed by CC-BY-NC