Automatic Recording Device deployed on the Mt. Mansfield ridgeline in late April of 2017. Each morning and evening through June, it will record all birds calling and singing over several hours. Photo courtesy of Jason Hill.

From birds to bumble bees, salamanders to swallowtails, VCE biologists harness the power of technology to help solve complex wildlife conservation issues. A 2017 TechGrant award from the TechFoundation will now enable us to accomplish even more.

VCE will apply its TechFoundation award to enhance our technological capacity, via three upgraded laptop computers for our conservation science staff. Each laptop will be customized to the varying computational and analytic needs of individual staff, thus maximizing efficiency and productivity. Further, VCE’s TechGrant will enable the purchase of seven automated recording devices (ARDs) for an innovative study of Bicknell’s Thrush in actively managed forest stands of western Maine. Results of this project will help refine population estimates of this vulnerable songbird and will enable development of novel conservation strategies, whereby appropriate silvicultural prescriptions could be used to create additional breeding habitat in the U.S. “This type of targeted technological enhancement is precisely what the TechGrants program is intended for,” said TechFoundation Executive Director David Altshuler.  “We are excited to be able to support VCE in its use of new technologies to further conservation science.”

Technological advances over the last few decades have provided conservation biologists with tools and techniques that are essential to the way we practice and communicate conservation science today. Through the innovative use of these new tools, which include systems and statistical procedures, entire new lines of investigation have opened.

“All of this work requires sophisticated, up-to-date technology,” says Rimmer. “We are delighted to again be the recipient of this important technology grant award from TechFoundation. We simply couldn’t achieve the caliber of conservation science we aspire to without such support.”

Since its founding nearly a decade ago, VCE has used powerful GIS, modeling software and hardware to help solve complex conservation science issues. For example, we were able to model the distribution of Bicknell’s Thrush winter habitat in the Caribbean, enabling more focused efforts to conserve this high-priority migrant across its winter range. Recently, this work spurred VCE’s first-ever field trip to Cuba, where we launched a promising conservation partnership with the Cuban conservation group BIOECO.

In 2016, VCE biologists attached solar-powered GPS tags to 40 Upland Sandpipers and Eastern Meadowlarks, in an effort to unravel their migratory pathways and destinations as they travel between breeding and wintering grounds. Combining geospatial data with powerful statistical tools, we can determine where a tagged bird was each day on its travels across the hemisphere. VCE’s early discoveries include the extraordinary southward route of one female Upland Sandpiper, who traversed nine countries between her breeding site in Kansas and her wintering location in Argentina. Updated findings, now being processed on our new laptops, will allow VCE biologists and our partners to concentrate conservation action in places where these birds most need it. The fall 2016 migration route (>10,000 km, as of early November) of a female Upland Sandpiper that bred in Kansas. This bird was fitted with a solar-powered satellite tag in April, 2016 at Konza Prairie, Kansas. After leaving Kansas in July, she visited nine additional countries on her southward journey that ended in Argentina. VCE’s upgraded laptop computers, made possible by a 2017 TechGrant, are now working hard to create ArcGIS maps of the full migratory pathways of this and 3 other satellite-tagged Upland Sandpipers, as well as 3 Eastern Meadowlarks.

Closer to home, VCE’s new project on Bicknell’s Thrush occupancy of managed forests in Maine, uses ARD technology, which we first deployed in 2016 on our long-term study of phenology on Vermont’s Mt. Mansfield. These programmable devices offer a safer and more efficient solution to 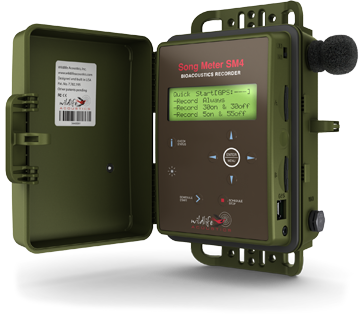 driving long hours on remote logging roads in Maine: they can be deployed during daylight hours, programmed to record sounds at appropriate times (e.g., dawn and dusk), and retrieved after a suitable interval of time, thereby allowing a single observer to effectively sample multiple forest stands every day. We are excited about the findings this novel approach will yield during our pilot field season of 2017. Automated recording devices piloted on VCE’s Mansfield Phenology Project in 2016 gave us daily calling frequency of Bicknell’s Thrushes. Notice the lack of vocalizations over several days in early June, when a late snowstorm blanketed the mountain. Thanks to a TechGrant award, VCE will deploy these devices in industrial forests of Maine during 2017, as we continue their use on Mansfield.

“From Canada to South America, there is a tremendous amount of science and conservation that needs to be done.” said Rimmer. “The technology upgrades made possible by this TechGrant award will not only help VCE accomplish that work, but will enable us to communicate the information to those who can implement direct, on-the-ground conservation actions.” You can follow all VCE’s progress and even join our efforts as a citizen scientist by visiting the VCE web site.